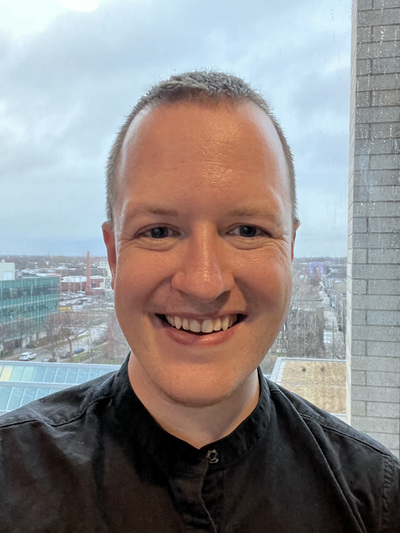 Matthew Johnson (he/him) teaches courses in Yiddish Studies and German-Jewish Studies, including courses that address topics such as diaspora, exile, and migration, translation theory and practice, gender and sexuality, and literature, film, television, and other media. Students interested in these and related topics are encouraged to reach out to him about course offerings and research and language learning opportunities at the OSU and beyond!

Johnson is currently working on a book project, Faltering Language: On German-Yiddish Literature, which demonstrates how the intersection between German and Yiddish became an important but largely forgotten site of cultural production from around 1900 to the present. He has also written on topics such as Moyshe-Leyb Halpern’s unfinished poetry, the reception history of Glikl’s memoirs, and Paul Celan’s translation of an essay by James Baldwin. He has further contributed to the exhibition “Die Wiener Rothschilds. Ein Krimi” at the Jewish Museum Vienna and co-organized two national conferences on the work of the composer Erich Wolfgang Korngold and on the concept of “linguistic homelands” in modern Hebrew, Yiddish, and German literature.

Johnson received his Ph.D. from the Department of Germanic Studies at the University of Chicago in 2022. He previously studied at the Vilnius Yiddish Institute, the Freie Universität Berlin, and New York University. His research has been supported by the Fulbright Commission, the IFK (Internationales Forschungszentrum Kulturwissenschaften) in Vienna, the Deutsches Literaturarchiv Marbach, the Yiddish Book Center, the YIVO Institute for Jewish Research, the Posen Society of Fellows, and the Austrian Cultural Forum. He also serves as an elected member of the executive committee of the LLC Yiddish Forum at the Modern Language Association and is an incoming member of the editorial board of In geveb: A Journal of Yiddish Studies.

At the University of Chicago, Johnson also held positions at the Chicago Center for Teaching and at the College Center for Research and Fellowships, where he helped run the Undergraduate Research Symposium and the College Summer Institute in the Arts, Humanities, and Social Sciences.