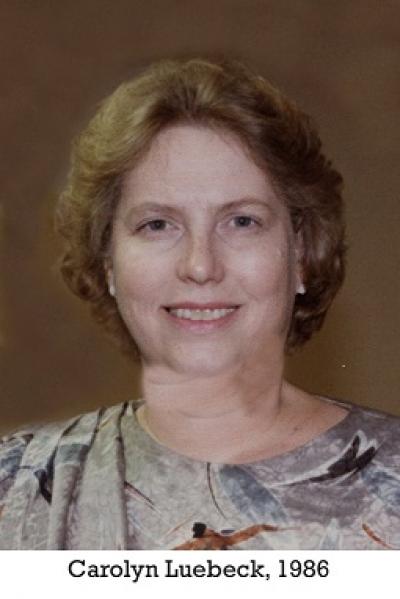 Carolyn Engel Luebeck was born and raised in a farming community around Wooster, Ohio. After graduating from Wooster High School in 1957, she was the first from her family to attend college. She enrolled in The Ohio State University, received a quality education, and graduated in 1961 with a BA degree, majoring in German. In 1979 Carolyn earned a MS in Administration, Information Systems Technology, from George Washington University in D.C.

Carolyn’s favorite professor at OSU was Dr. Dieter Cunz, a popular pedagogue who had chaired the Department of German from 1957 until 1969. Outside of the Department she evinced a special admiration for Coach Woody Hayes, who coached the OSU football team for 28 seasons.  She remained a loyal booster of the University through her entire life.

After she completed her studies at Ohio State, Carolyn embarked on a long and successful career working for the Central Intelligence Agency. She held a variety of positions that involved information indexing and retrieval; the analysis of scientific, education, and political personalities and organizations in China; the assessment of water resources in several Middle Eastern countries; and the acquisition and implementation of various computer-based analytic technologies.

Carolyn cherished her family, and she enjoyed sewing, gardening, reading, and travel adventures. Raised a Methodist, she later became a Presbyterian.

Carolyn passed away from cancer in 1988 at the age of forty-eight.