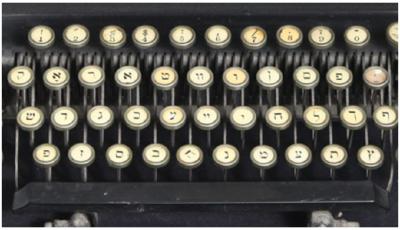 For more information about Yiddish courses at Ohio State or
to find out about minoring,
please contact Dr. Matt Johnson (.9927),
our Director of Yiddish and Ashkenazic Studies. 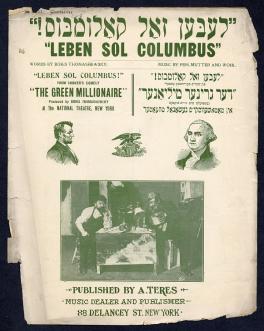 For roughly a thousand years, Yiddish was the shared vernacular language of Ashkenazic Jewry. While Jews across the diaspora developed many of their own languages (including Ladino, Judeo-Arabic, and Juhuri), Yiddish was the most widely-spoken Jewish language until the emergence of modern Hebrew in the late nineteenth and early twentieth centuries. From the Middle Ages through the Enlightenment–and in many cases up until World War II or beyond–Ashkenazic Jews may have prayed and studied in Hebrew and Aramaic, but lived their lives in Yiddish. In fact, Yiddish was often identified with ordinary people, including women and the working class. By the nineteenth century, intellectuals and modernist writers sought to improve the status of Yiddish by creating a highbrow culture in the language.

The term “Ashkenazic” refers to Jews whose ancestors lived in Germany and the surrounding areas during the Middle Ages. Ashkenazim include most Jews whose families lived in Western, Central, and Eastern Europe in the nineteenth and twentieth centuries, as well as most Jews in the United States today. Yiddish is a portal to their lives–the way they ate, danced, praised and scolded their children, and made sense of the world around them. Yiddish charts the tumultuous history of Ashkenazic Jewry. Yiddish literature depicts the various historical developments Ashkenazic Jews have encountered, including modernism, urbanization, nationalism, pogroms and the Holocaust, secularism, religious movements such as Hasidism, migration, and radical politics. It would be virtually impossible to study these aspects of Jewish history without engaging with Yiddish. At the same time, Yiddish also contributes to many other fields, including Migration Studies, European history, Germanic linguistics, labor history, global modernism, and folklore. As a minority language spoken around the globe, Yiddish offers a fascinating perspective on transnational history and cultural change.

Like English, Yiddish is a fusion language. Unlike English, it is written in the Hebrew alphabet. The Yiddish spoken today contains elements of medieval German, Hebrew and Aramaic, Slavic languages, and medieval Romance languages, although these components differ by time period and dialect. For instance, Argentinian Yiddish singer Jevel Katz used Spanish words in his songs. Most scholars agree that Yiddish developed on the border of France and Germany during the Middle Ages, but by the twentieth century, linguist Uriel Weinreich could famously claim in his 1949 Yiddish textbook College Yiddish, that “yidn in ale lender redn yidish”– in all countries, Jews speak Yiddish. Seventy years later, Yiddish is studied by students from all kinds of religious (and non-religious) backgrounds in language programs around the world. By learning Yiddish, you can connect with these scholars, artists, and cultural activists (as well as native speakers of all ages)–and discover opportunities to make your own contributions as a yiddishist.

Courses in Yiddish language, literature, and culture have been offered at The Ohio State University since 1978. YAS joined the Department of Germanic Languages and Literatures in 1999, which created opportunities for shared work in Holocaust Studies and German-Jewish Studies. Historic strengths of YAS at Ohio State include Performance Studies, Folklore Studies, and Linguistics. Classes in Yiddish language will resume Autumn semester 2020. Students in YAS courses will learn about Yiddish civilization from a wide variety of perspectives, and discover exciting developments in the Yiddish world today.

Why not? Yiddish can help you better understand a wide range of topics such as Eastern European history, Germanic linguistics, Jewish genealogy, religious thought, radical political movements, and debates about immigration and American identity. Studying Yiddish literature gives you the opportunity to engage with powerful texts that have often not been translated into English (there are also great resources if you want to become a translator). Yiddish also has some great expressions, like “hak mir nisht keyn tshaynik” (don’t bother me), which literally means don’t bang a tea kettle at me.

Hundreds of thousands of people worldwide. Even though Isaac Bashevis Singer once said he wrote in Yiddish because he liked writing ghost stories and a dying language was a great fit for them, today the number of Yiddish speakers may actually be on the rise. Most Yiddish speakers live in insular religious communities in New York and Israel. There are also heritage speakers of all ages who do not live in those communities, including Holocaust survivors and their children (and in some cases grandchildren and great-grandchildren). In some places, like Montreal and Mexico City, Jewish day schools teach (or until recently taught) Yiddish. And lots of people learn Yiddish through university or adult education programs. You can find Yiddishists all over the US and around the world, including cities such as Buenos Aires, London, Stockholm, Berlin, Vienna, Tel Aviv, Vilnius, Krakow, St. Petersburg, Tokyo, and Melbourne.

What can I do with Yiddish at Ohio State?

You can take classes in Yiddish literature, culture, and language. These classes fulfill several GE requirements. You can also minor in YAS. The Melton Center offers the Morris and Fannie Skillken Family Foundation Endowment Fund Scholarship for Yiddish and Ashkenazi Studies. Students have also studied Yiddish abroad with funding from the George and Emily Severinghaus Beck Scholarship Fund from the Melton Center. Stay tuned for more special events and lectures.

What YAS classes can I take?

Resources at Ohio State and in Columbus