The OSU Dresden Summer Program in Germany has taken place since 1993. 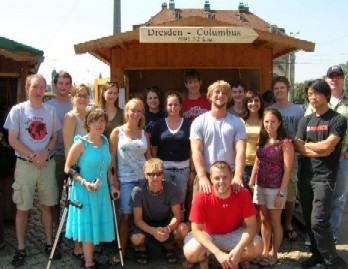 The Program is an eight-week, intensive language and culture course offered at the Technische Universität Dresden (TUD). The program provides beginning and intermediate German language students with the opportunity to increase their language ability, study the recent history of Dresden and Saxony in general, and experience contemporary German life and culture. In addition to classroom instruction offered by OSU German instructors and guest lecturers, students will participate in group field trips and have ample opportunities to explore on their own.

This program is open to qualified undergraduate and graduate students of all majors. Applicants must be in good academic standing and have received at least a 'B' in all German classes taken prior to the program. 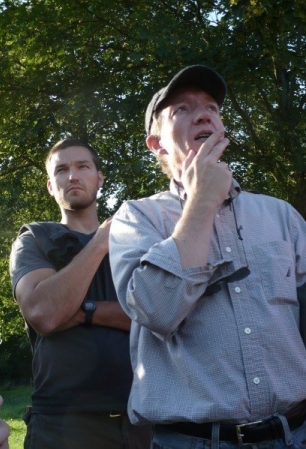 Description of the Dresden Summer Program

Since 1993, groups of Ohio State students have been spending eight weeks during the summer living and studying in Dresden, the Sister City of Columbus. Here's a report from a recent

summer in Dresden when a group of 24 students successfully completed the program, which combines academic rigor with the opportunity to experience German life and visit not only "Florenz an der Elbe" but also Berlin, Weimar, Meissen, and a host of other sites of interest in the vicinity of the capital of Sachsen.

Administered by Ohio State's Office of International Education (OIE), the Dresden Summer Program is staffed by one faculty member from GLL, two teaching assistants from the department, and two from the Technische Universität Dresden (TU). Much has been achieved in the 15 years since the Program's inception but there is no better indicator for its success than the close to 100% record in returning students, who it should be remembered are at the beginning stages of their studies of German, firmly resolved to continue their studies of German language and culture beyond the level of fulfilling a language requirement, and in many cases to the level of a minor and indeed a major in German. 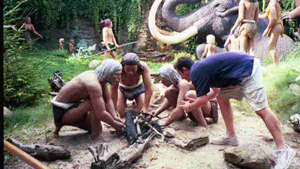 Two levels of instruction are offered in Dresden: All students are enrolled in German 2352 (The Development of Contemporary Germany: Dresden Yesterday and Today), a cultural history/current affairs GE class with special emphasis on Dresden, taught in English by the faculty member. The group then splits into two: The two OSU TA's teach Beginning German, while our colleagues from the TU instruct our more advanced students in German. All students who successfully complete the program thus return home with 12 hours of OSU credit. But they also return with much more... 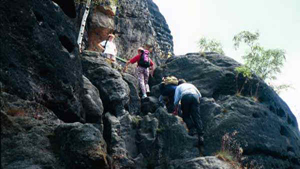 Living in dorms our students come into immediate contact with students from the TU and, thanks to the efforts of the staff of the Auslandsamt there, we have also been provided for the past nine years with a list of potential conversation partners from among the student body who have volunteered their services. This past summer, an American-style cook-out on the banks of the Elbe, to which we invited the conversation partners, resulted in a number of lasting friendships.

Dresden, of course, offers a myriad of opportunities for the students, from its world famous art collections to open air cinema on the river, from flea markets to opera, from the nightlife of the distinctly alternative Neustadt area to the baroque splendor of the Zwinger and Pillnitz Palace. In addition to these options there are also the weekly field trips which form an integral part of the 2352 course and which, quite literally, take the classroom out into the world. Last summer we started our investigations into the history of the area with a visit to the nearby city of Meissen, its twelfth century cathedral and fifteenth-century palace, the Albrechtsburg. The following week we took in the medieval city of Pirna and continued on by boat downriver to Europe's largest fortification, Königstein. Our third trip saw us spend two days in 1999's European Cultural Capital, Weimar. As a group we explored the city on foot and visited Buchenwald concentration camp. Students also had the opportunity to visit other sites, such as Goethe's house, the Bauhaus museum, and the city castle, in smaller groups. 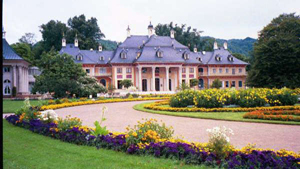 This out-of-town adventure was followed by one closer to home as we visited the moated hunting castle of Moritzburg, a retreat favored by August the Strong and our fourth destination, which we travelled to by steam train. New in 2002 was the bus trip to the medieval city of Freiberg in the Erzgebirge, where we visited the silver mines and the magnificent cathedral.

A highlight of each year's program are the four days which we spend in Berlin being shown the city by one-time OSU exchange student from Berlin's Free University and Berlin expert, Stephan Goetz. With the government having just moved to the city and new buildings going up everywhere one looks, now is a particularly exciting time to be there and it was an exhausted group of students (and instructors) which returned to Dresden late Sunday evening.

Tobias Bulang, another former OSU exchange student, having recently completed his dissertation in the TU's German department, took the helm for our final excursion to his home town of Bautzen, center of Sorbian life in the Lausitz area of Sachsen. As befits a last outing we finished the day in style at a traditional Sorbian restaurant where we were treated to a feast of Sorbian culture including dancing and, for the more adventurous, the chance to try on traditional Sorbian dress.

The program is healthier than ever thanks to the efforts of a number of individuals and organizations, including the Max Kade Foundation, which has provided generous financial assistance to students over the years. The OSU Summer Program has become a fixture in the TU landscape.

Some links that may be of interest to you if you wish to study in Dresden this summer!