Celebrating our German majors and minors

Celebrating our German majors and minors 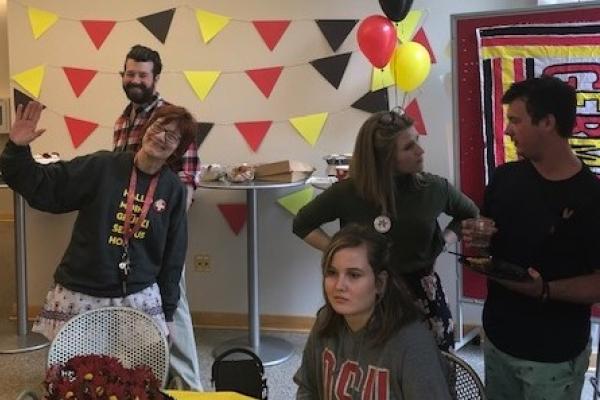 The 2019-20 Dieter Cunz Outstanding Graduating Senior is
Elena Akers (International Affairs scholar, double major in German & International Studies)
Over the past four years, Elena Akers has demonstrably achieved terrific success in her coursework and, in the eyes of her professors and peers, proven an invaluable member of the Germanic Department both inside and outside the classroom. Among other acts of support, Elena has always proven willing to talk with younger students and share her experiences. Moreover, while pursuing a rigorous course load, Elena successfully wrote and defended an honors thesis for research distinction that makes a meaningful and novel contribution to our understanding of contemporary conservative rhetoric on German-language Twitter. In addition to her superior work ethic, Elena's tremendous talent for original thought has made her an outstanding graduating senior.

Our Wolfgang Fleischhauer Scholar next year will be
Jess Kavinsky (German, International Studies)
The Wolfgang Fleischhauer Scholarship, with generous support through the Robert F. Gagel/Margo Cox Endowment Fund, has been awarded to Jessica (Jess) Kavinsky.
Jess is planning to write—and has already begun research for—a thesis next year. Her broad topic is the way that societies process the aftermath of genocide. In particular, she will investigate the way that women are represented in genocide memorial sites: the kinds of roles ascribed to them, and the function that those roles play in cultural memory of events. Jess will be visiting sites in Rwanda and in Germany.

Altan Turkoglu (German, Physics, Astronomy and Astrophysics) wrote an excellent paper, A Rhetorical Analysis of Johannes Kepler’s Astronomia Nova, and was given the project prize in the English-language category. The paper was notable for its perceptive rhetorical analysis of a scientific text and the way it linked these rhetorical strategies to the cultural context in which Kepler did his scientific work.