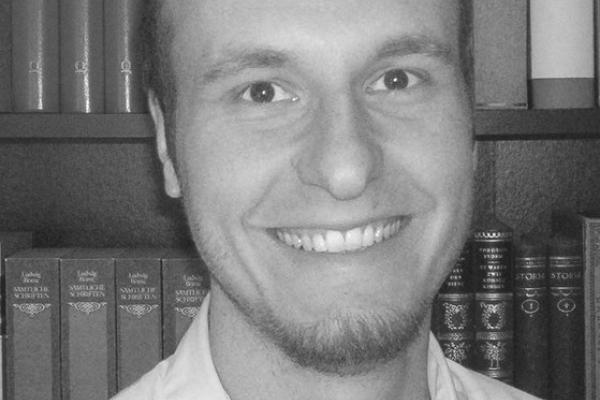 The Department of Germanic Languages and Literatures at Ohio State and the Department of German Studies/Comparative Literature and Cultural Studies at the University of Bonn have established a new Faculty Exchange that will begin in Spring 2018. The aim of the exchange is to foster collaboration on the levels of research and graduate education between the two departments and to help establish professional international networks for graduate students.

Our first visitor to Ohio State is Dr. Christian Meierhofer, Assistant Professor, whose present research focuses on the intersections between literature and science, popular non-fiction, and media history and theory, from the 16th century to present. As a member of larger research networks, funded by the German Research Foundation (DFG), Dr. Meierhofer also investigates, among other topics, the relationship between literature and the present, and the culture of market relations in Early Modernism.

Dr. Meierhofer just completed his forthcoming habilitation on popular science writings in the 19th century, which sheds a critical light on the common notion that popularizing science simply means to water it down for a wider audience. His published books include a monograph on the emergence of what we now call „news“ in Early Modernism (Alles neu unter der Sonne. Das Sammelschrifttum der Frühen Neuzeit und die Entstehung der Nachricht, 2010); an introduction to the life and works of Georg Philipp Harsdörffer (2014), one of the most influential intellectuals and authors of the 17th century; and a comparative study of constructivism and deconstruction (Nihil ex nihilo: Zum Verhältnis von Konstruktivismus und Dekonstruktion, 2006).

Among Dr. Meierhofer’s co-edited books are studies on the institution of marriage (forthcoming, 2018), on the representation of WWI in literature, media, and non-fiction (2014 and 2015); and on literary and cultural theory (2011); as well as an anthology of science writing from the 19th to the 20th centuries (2015). Dr. Meierhofer has also published numerous articles in his various fields of research.

In Spring Semester 2018, Dr. Meierhofer will offer a graduate course (German 6300), taught in English and open to all graduate students in Arts and Sciences, that will introduce students to the highly topical fields of ecocriticism and environmental humanities, from historical and contemporary perspectives. The course will be co-taught with GLL’s May Mergenthaler who has research specialties in Romanticism and the Goethezeit, literary theory, poetry, and the public sphere, and is currently working on a monograph on sun and sunlight in German poetry around 1800.