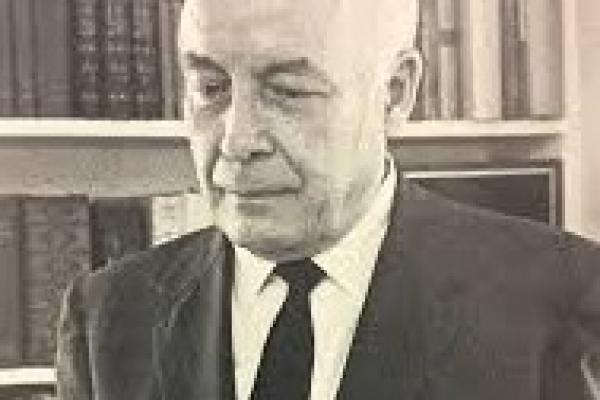 The Department is grateful to learn of the Robert F. Gagel/Margo Cox Endowment Fund, established in November 2016 with gifts from Robert F. Gagel, MD (BA/MD 1971). The fund will provide a scholarship to be awarded annually to a junior German major in the College of Arts and Sciences.

The scholarship honors Professor Wolfgang Fleischhauer, who taught at Ohio State from 1936-1978. Born in Kassel, Germany, Wolfgang Fleischhauer completed his doctoral work in Scandinavian linguistics and mythology at the University of Cologne. In 1936, he came to Ohio State to work with his mentor, Professor Hans Sperber. In his research, Fleischhauer traced links between intellectual movements, emotional attitudes, and semantic change. He also studied dialectology, investigating a German dialect spoken by the descendants of immigrants in Auglaize Country, Ohio.

In addition to being a distinguished researcher, Professor Fleischhauer was beloved by the students of the university. In 1969, he received the Alfred J. Wright Award for service to student activities and guidance of student leadership. In 1978, his friends, colleagues, and students gathered to celebrate his 65th birthday and 40th year at Ohio State. In the dedication to the book they presented him, Charles W. Hoffmann quoted a former student as saying “Professor Fleischhauer is great. He knows just what to say to you. He’s an experience.” Hoffmann continued:

The undergraduate author of this praise put a finger on what must finally be the most important side of Wolf Fleischhauer’s relationship to words. He also knows their everyday ways … that how they are used will help or hurt, encourage or destroy, reach out or turn away. This knowledge of their power is combined in him with kindness and a great generosity of spirit; and the combination – the heart of his gentle humanity – leads him to use them in constructive ways with a consistency that few of us manage. In the words of his student, “he’s an experience” all right, and a richly rewarding one.

This knowledge, kindness, and generosity left their mark, as the gifts by his students attest. Dr. Robert F. Gagel’s gift follows one in 2015 by Dr. Henry Kratz, Jr. (MA 1946, PhD 1949) which was also established in honor of Professor Fleischhauer.

We would like to express our deepest thanks to Dr. Robert F. Gagel for his generosity in establishing the Robert F. Gagel/Margo Cox Endowment Fund and the Professor Wolfgang Fleischhauer Scholarship.