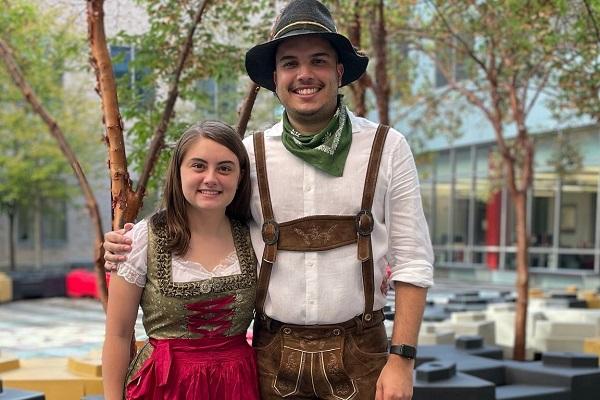 It is early autumn. Time to wear Tracht in certain German-speaking regions and in spots right here in Ohio that were settled by German-speaking immigrants in the 19th and 20th centuries (Columbus, Cincinnati, Cleveland, etc.) where the traditional autumn festivities take place.

Tracht is the garb traditionally worn to commemorate this time of the year in which Oktoberfest and other Volksfeste, such as the Wiener Wiesn-Fest, take place. A section in the new textbook this year looks at Tracht culturally and as connected with stereotypes about German speakers.

Two of our GTAs brought the topic to life in our German 1101.01 and 1102.01 classes this week. Delighted undergrads learned about the components of traditional dress, its cultural meaning, and the history and traditions of regional festivals in Bavaria and Austria! Questions were asked about who wears Tracht and for which occasions, and also about the meaning and history behind the outfits.