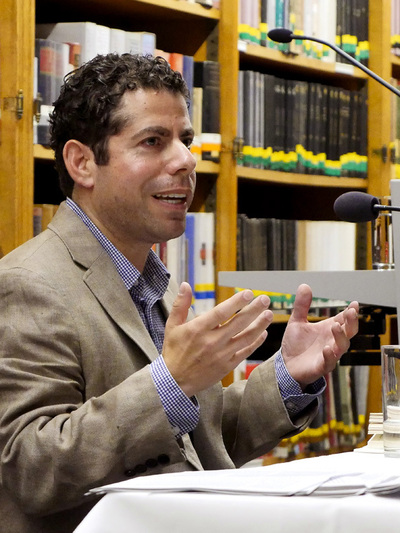 Reitter’s scholarship focuses primarily on two areas: German-Jewish culture and the history of higher education. Of particular concern in both cases have been the links between intellectual and institutional history, the relationship of cultural crisis and cultural innovation, and the effects of technological change on humanistic culture. A practicing translator, Reitter is also interested in the field of translation studies. He is the author of three books. The Anti-Journalist: Karl Kraus and Jewish Self-Fashioning in Fin-de-Siecle Europe (U of Chicago Press, 2008), On the Origins of Jewish Self-Hatred (Princeton UP, 2012), and Bambi’s Jewish Roots: Essays on German-Jewish Culture (Bloomsbury, 2015). His current project—coauthored with Chad Wellmon—considers how the factors and processes that allowed the modern humanities to flourish have at the same time made life difficult for the humanities. While the story the book tells is set mostly in nineteenth-century Germany, it will engage vigorously with debates about the state of the humanities in our own day. Under advance contract to the University of Chicago Press, this project is tentatively titled Permanent Crisis: The Humanities in an Age of Disenchantment. Reitter’s articles and essays have appeared in an array of venues, ranging from Representations, American Imago, and Jewish Social Studies to Harper’s Magazine, the TLS, The Nation, the LA Review of Books, Bookforum, and The Hedgehog Review.

Reitter has worked collaboratively on a number of editions, including The Kraus Project (FSG, 2013), with Jonathan Franzen and Daniel Kehlmann, Anti-Education: On the Future of Our Educational Institutions (New York Review of Books Classics series, 2015), with Chad Wellmon, The Rise of the Research University a Sourcebook (University of Chicago Press, 2017), with Louis Menand and Chad Wellmon, and the forthcoming volume, for which he served as the translator, The Autobiography of Solomon Maimon (Princeton University Press, 2018), with Abraham Socher and Yitzhak Melamed. Together with Chad Wellmon, Reitter is working on a new English edition of Max Weber’s famous vocation lectures, to be published in the New York Review of Books Classics series. With Anthony Grafton, Caroline Winterer, and Wellmon, Reitter is a co-editor of the new book series “Histories of the University” (University of Chicago Press). And with Paul North, he is working on an annotated English edition of Marx Capital (Vol. 1), which will include his own new translation of the text. Reitter is, in addition, a member of the editorial boards of Nexus and American Imago.

His research has been supported by fellowships from the German Literature Archive (DLA) in Marbach, the Frankel Institute for Advanced Judaic Studies at the University of Michigan, the Simon Dubnow Institute for Jewish Studies in Leipzig, the Lion Feuchtwanger Archive at USC, and the American Academy in Berlin.

As director of the Humanities Institute at Ohio State (2012-2017), Reitter developed and launched a number of programs, among which were three lecture series, a faculty-led writing group for undergraduates working on a thesis, two outreach courses (this has entailed partnering with OSU’s Office of Diversity and Inclusion and Columbus’s CATCH Court program for survivors of human trafficking), and a pilot version of the Institute’s faculty working groups.

With Chad Wellmon, "How the Philologist Became a Philosopher of Modernity: Nietzsche's Lectures on Education," Representations 131 (Summer 2015) 68-104.

On the Origins of Jewish Self-Hatred (Princeton University Press, Spring/Summer 2012).