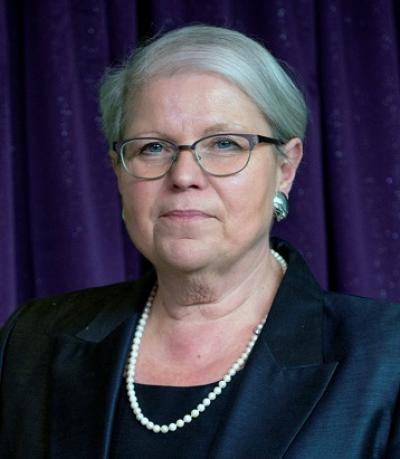 Karin A. Wurst earned a PhD in German Studies from Ohio State in 1985, describing her time here as “an extremely exciting time for a budding Germanist.” She taught for one more year and then accepted a position at the University of Arkansas as a Visiting Assistant Professor. By 1988, Prof. Wurst had secured a tenure-track position at Michigan State University, was granted tenure after the first probationary period, and within ten years, had been promoted to Full Professor.

Prof. Wurst recalled that the completion of her dissertation was greatly helped along by her final year as a Presidential Fellow. “My preparation was such that I felt that I could (and did) hit the ground running! My excellent experience made me determined that I wanted to become a faculty member at a large public RO1 university. And indeed when I joined the faculty at Michigan State University, I very much felt at home.”

Reminiscing about the impact that Ohio State University’s Graduate Program in German had on her career, Karin Wurst noted an appreciation for pedagogy training, which she described as an integral and valued part of the program. “The opportunities to gain mentored practical experience were priceless.” In addition, she served as an editorial assistant to the German Quarterly, which was hosted under Henry Schmidt’s Editorship and Michael Jones’ Associate Editorship. “Another experience that I emulated in my later professional life,” she said.

She appreciated also the broad offering of wonderful courses and that the faculty invited exciting visiting writers and scholars on a regular basis—people like Christa Wolf and Wolf Biermann.

One of my most vivid memories was when fellow graduate students and I invited Christa Wolf to my, let’s say rather modest, apartment for an after-hours exchange about her work. She came, sporting a loaf of French bread, and we had an amazing conversation. This was extremely motivating and as a young assistant professor, I sought to emulate the practice of visiting scholars as best I could, at times drawing on OSU faculty in the process. I welcomed Helen Fehervary to one of my seminars and Bernd Fischer to others.

Professor Wurst credits her excellent graduate training at Ohio State with her later success in establishing a strong research agenda at Michigan State University. Indeed, she is a recognized expert in literature of the eighteenth century, having published monographs on Gotthold Ephraim Lessing, J.M.R. Lenz, and Entertainment and Cultural Consumption in Germany from 1780-1830. She has edited numerous volumes on a variety of topics including Eleonore Thon’s novel Adelheit von Rastenberg, the writer and dramatist J.M.R. Lenz, and women and drama in the eighteenth century. She has contributed numerous essays to many of the most outstanding journals in the field, and published important articles in essay collections and lexica. Professor Wurst has delivered scholarly papers at scores of national and international conferences, both on topics relating to German and on issues of higher education.

Professor Wurst also cites her experiences in German at Ohio State as instrumental for the service orientation that eventually took her into university administration. As a graduate student, she had the opportunity to serve on text-book selection committees, had input on hiring committees, and participated fully in preparations for visitors, all of which created a broad-based skill-set that prepared her for her future career. She began as a typical faculty member at Michigan State, but soon became active in faculty governance. She had the opportunity to chair University Graduate Council at two separate times in her career. In her Department at MSU in 2003, she assumed the post of Associate Chair and after a few years, briefly became the Acting Chair. MSU recognized her abilities in administration, and shortly thereafter she was then tapped for two terms as Dean of the College of Arts and Letters, “a position,” Prof. Wurst writes, “I relished immensely because it provided me with a bigger platform for innovation and change.”

It is an honor to recognize Professor Karin A. Wurst as our 2018 Distinguished Alumna.